Simon Deng’s on a hunger strike: Amp up his voice! Monday – Wednesday, May 18-20 Call the White House comment line : 202.456.1111  202.456.1111 . Leave a message: Mr. President. Look out your window. Simon Deng is calling for your help for South Sudan. Act now to stop the senseless slaughter, displacement and destruction in South Sudan by taking the lead to broker peace. Stop the flow of petro-dollars that fund conflict by putting them in escrow for justice, accountability, trauma healing, an interim government and peace. Your immediate action is needed urgently. I look forward to your response. Thank […]

Prayers for peace requested after renewed fighting in South Sudan World Mission partners and co-workers are reporting renewed fighting in Malakal, Upper Nile State, South Sudan. For the past few weeks, there have been increasing inter-ethnic tensions in Malakal, which serves as a base for both South Sudanese military forces and a number of ethnic militias. These groups have clashed on a number of occasions on the outskirts of Malakal, prompting many civilians to flee their homes and seek refuge in a United Nations shelter. On April 21, fighting broke out in Malakal, reportedly among ethnic militias allied to and […]

by admin on May 4, 2015 in News END_OF_DOCUMENT_TOKEN_TO_BE_REPLACED

UNICEF welcomes final release of child soldiers by armed group in South Sudan Children surrender their weapons during a ceremony formalizing their release from the SSDA Cobra Faction armed group, in Pibor, South Sudan (February 2015). Photo: UNICEF/NYHQ2015-0201/Rich 24 April 2015 – Militants in South Sudan have handed over to the United Nations Children’s Fund (UNICEF) a final group of 283 children in what the agency described as “a small piece of good news in what is otherwise a terrible situation for children in other parts of [the country],” where many boys and girls have been abducted and forcibly recruited […]

by admin on April 27, 2015 in News END_OF_DOCUMENT_TOKEN_TO_BE_REPLACED

Update from the Presbyterian Church of South Sudan Situation Update from the Executive Secretary of our partner,  The Presbyterian Church of South Sudan April 23, 2015   Dear brothers and sisters in Christ. We seek your continued prayers for South Sudan I made a phone called to Malakal and Juba this afternoon at 1:30 PM.  The report was the Shilluk forces have captured of the Town of Malakal forcing the SPLA -mostly Nuer and Dinka – in the Town to run out from town and back to reattack at 11:00 AM this morning with reinforcement by Dinka SPLA from Melut and […]

by admin on April 25, 2015 in News END_OF_DOCUMENT_TOKEN_TO_BE_REPLACED

Update from the Presbyterian Church of South Sudan

Situation Update from the Executive Secretary of our partner The Presbyterian Church of South Sudan April 22, 2015 Dear brothers and sisters in Christ’s service. Greetings from PCOSS while in Kenya. I would be very much grateful to inform you about the situation in Malakal.  Fighting occurred yesterday in Malakal. Since two weeks back there was tension between two tribes in the area – Dinka and Collo (Shilluk) – that forced civilians to escape the town. In the town remained armed people of Nuer, Dinka and Collo tribes. While fighting was from very far from the town, there was tension […]

by admin on April 22, 2015 in News END_OF_DOCUMENT_TOKEN_TO_BE_REPLACED

by admin on April 21, 2015 in News END_OF_DOCUMENT_TOKEN_TO_BE_REPLACED

Violence within a family in South Sudan

“Violence happens in every family (husband hits wife) but it usually is a problem of miscommunication, or the husband has been drinking.” 2015 started with a lot of traveling around South Sudan.  Only a few days after returning from Christmas break, I headed with my supervisor to Jonglei State.  Our first stop was to cross the river to Minkamen where we have been running two mobile clinics for IDPs (internally displace people) from the conflict that started in 2013.  We gathered some of the ‘clients’ from the two clinics (one reproductive health and the other general health) as ‘focus groups’ […]

by admin on March 18, 2015 in News END_OF_DOCUMENT_TOKEN_TO_BE_REPLACED

11 February 2015 – The United Nations Children’s Fund (UNICEF) is applauding the release of another 300 children from an armed group in South Sudan – the second such UN-backed demobilization of child soldiers in less than a month. “For every child released, it’s the chance for a new life,” UNICEF South Sudan Representative Jonathan Veitch stated in a press release issued earlier today and welcoming the news. Two weeks ago, an initial group of 249 children – ranging from 11 to 17 years of age – was released by the South Sudan Democratic Army (SSDA) Cobra Faction at the […]

by admin on February 24, 2015 in News END_OF_DOCUMENT_TOKEN_TO_BE_REPLACED

South Sudan militia frees first group of child soldiers – UN A South Sudanese militia has freed 280 child soldiers as part of a wider deal to release about 3,000 underage fighters, the UN’s children agency Unicef has said. More releases will occur in the coming weeks, said the agency, which helped negotiate the children’s freedom. The soldiers were recruited into an armed group which has now made peace with the government. Other rebel militias have been locked in a civil war since 2013. Fighting began after President Salva Kiir accused his deputy of trying to foment a coup, triggering […]

by admin on January 30, 2015 in News END_OF_DOCUMENT_TOKEN_TO_BE_REPLACED 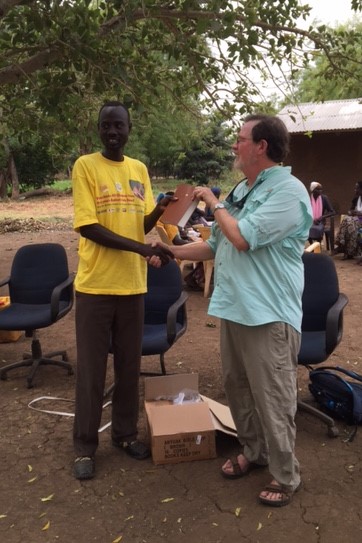 Mac Brown presenting Bibles in the Anyuak language to the people of Pochalla County, South Sudan.