You are here: Home / News / Report on the Annual Sudan Network Meeting 2015 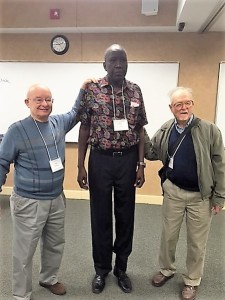 Trinity South Sudan Ministry
The Sudan/South Sudan Mission Network held its 20th annual meeting in Louisville, KY on the campus of the Presbyterian Seminary on October 19 and 20. Representatives from several presbyteries were present including Trinity, Shenango, Pittsburg, Redstone, and National Capital Presbytery. The meeting was well attended by staff members from PCUSA and a number of South Sudanese and Sudanese Americans. Trinity South Sudan Ministry (TSSM) was the organizers of this meeting.
Our foremost guest speaker was the Right Reverend Peter Gai Lual Marrow, Moderator of the Presbyterian Church of South Sudan (PCOSS) and Chairman of the South Sudan Council of Churches.  Rev. Peter was invited to the U.S. by TSSM and we paid for his trip. Rev. Peter was in the United States for a month meeting with the Sudanese diaspora in Des Moines, the United Nations in New York, the State Department in Washington and others. He also preached a number of times bringing a message of hope, peace, forgiveness and reconciliation.
Rev. Peter is a quiet, gentle person, full of humility, but one who speaks with great personal and Biblical authority reminding one of an Old Testament prophet calling the people to repent and follow the way of the Lord.
There is one thing you should know about this remarkable man. In December, 2013 as the civil war erupted groups of soldiers went on a rampage in Malacal killing any man, woman, or child from a tribe other than their own.  Rev. Peter gave sanctuary to anyone, regardless of tribe or religion, in the PCOSS headquarters compound in Malacal. Over 6,000 people gathered in the compound some weeping, some praying, and some singing hymns. When the soldiers came to the compound intent on killing those within Rev. Peter stood at the gate declaring “There are no enemies here”.  Then he invited the soldiers to put down their guns and come into the compound joining those inside seeking sanctuary. The soldiers simply went away. Three times soldiers arrived at the gate intent on killing those within and three times Rev. Peter declared “There are on enemies here”, invited the soldiers join those inside and three times the soldiers went away.
When Rev. Peter spoke to our conference he reminded us of the horrible costs of this civil war in human lives lost, homes and businesses destroyed and entire towns leveled. Both sides have committed numerous war crimes. He also spoke of the cost to the church with sanctuaries devastated, pastors killed, and congregations scattered. In fact, the PCOSS headquarters in Malacal was later destroyed as was the town of Pibor and the Service and Learning Together (SALT). Compound where Rev. Oruzo, our partner in missions is housed.
Rev. Peter urged us to continue our efforts to stop the fighting in South Sudan but be prepared to begin aiding the people of South Sudan in the healing process. He told us first, people must forgive those who have caused them harm and second, to ask for forgiveness from those whom they have harmed and third, begin the reconciliation process publically admitting their actions and making restitution.
The conference was a great success and Rev. Peter was an inspiration for us all to renew our efforts on behalf of our Christian brothers and sisters to rebuild the church in South Sudan and provide humanitarian aid until the people can resume their normal lives.
As of today, the PCOSS has moved its headquarters to Juba, the capital. TSSM is helping to rebuild the SALT compound in Pibor and our mission team is scheduled to go there in February 2016. Our goals are to help rebuild the SALT compound, dig a well and latrines, provide theological education for local pastors, support for the public administration of the new state of Boma,  assist the PC (USA) Education and Peacemaking project, and determine how we can help in rebuilding the sanctuary in Pibor. Robert Cely will also visit Pochalla, a town 60 miles to the north of Pibor, to determine how we can expand our ministry and medical services to those people
Please don’t forget that TSSM has a special offering on February 28 to help pay for the costs of these many projects. Ask your sessions to put the offering on their church calendars if they have not already done so.  TSSM will provide a moment for mission in January and we will be glad to visit your church anytime to tell about what they, the people in the pews are accomplishing through their South Sudan ministry.
Submitted by:
Dr. Mc H. Brown, Moderator                                                                                     Trinity South Sudan Ministry

by admin on October 27, 2015 in News
Previous Entry: Rights Groups ask for help from Justice Department